Owner Jeff Shorey dreamed of building homes from the day he was introduced to carpentry as a summer student 15 years ago. He honed his skills working under the direction of professional carpenters for nearly 10 years before starting his own business five years ago. But he’s not only building homes. He’s also building rapport.

I had a dream of building a house at some point in my career and, when that finally happened, we got busier and busier.”

Shorey has realized his dream of building a house time and time again while Shorey Construction Ltd. has grown from a two-person operation to a crew of seven enthusiastic carpenters, but making something out of nothing, building a home in what was once a vacant field, never gets old.

Anything you have a set of blueprints for I can build,” Shorey says.

Shorey’s crew consists of carpenters with unique skill sets that grant homeowners the utmost flexibility throughout every stage of construction. From tiles to hardwood floors, stone casings to trim installations, Shorey Construction can do it all – on time and on budget. The crew is reliable, fast, meticulous and driven. Shorey’s crew builds homes they can stand by, homes that will be a shining example of what Shorey Construction is capable of for years to come.

When I started it was all about quality of work and it still is.”

In order to make the construction process as efficient as possible, Shorey works with a proven network of tried, tested and true industry contacts that can address the electrical, plumbing and heating needs of every home he’s contracted to build. Looking to build a starter, retirement home or anything in between? Look no further than Shorey Construction. 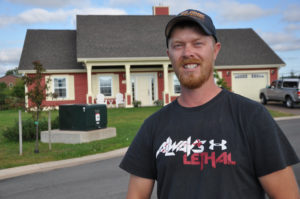